skip to main | skip to sidebar

Accepting death is very difficult for human beings, although all living creatures are bound to die one day. Death is experienced just once in a lifetime. It is impossible to know in advance what we will feel at the moment of dying and what may come afterwards. I, too, have experienced the death of persons close to me. This was very painful and hard to understand. In our life, it is basically impossible to ignore death.

In 2011, the unexpected earthquake and disastrous tsunami in north-eastern Japan and the accident at the nuclear power station of Fukushima run by Tepco profoundly shocked people all over the world, including myself. Suddenly, thousands of persons died under the black and turbid waters of the tsunami in a formerly peaceful province, while the survivors are now living in fear of diseases caused by radioactive contamination. It occurred to me that “Memento Mori” is still a valid concept.

One of my works is entitled “Heartbeat of the Death 2“*1. This painting, in which I depict a princess as a skeleton, in a way references the portrait of the Infanta Margarita by Diego Velazquez. Her portraits were painted at age three, five and eight years. The young, naive expression of the princess, who is shown in the painting standing perfectly still like a doll in her magnificent dress, enchanted me. But contrary to the first impression of this lovely young girl, her life was blighted by calamity. After repeated miscarriages due to the frequent intermarriages in the Habsburg family and several live births, she died at only 22 years of age. Of her six children, only one daughter survived. I contemplated the painting, imagining the short future ahead of this child, and it seemed to me as if a shadow of death were suddenly looming over her innocent, frail body. 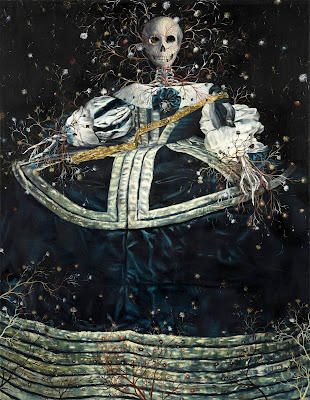 Since moving to Austria, I have time and again encountered signs of death in everyday life. An example: when I go out shopping, the doors of the Ursuline Church at half-point of the Linz Landstrasse are usually open. I enter rather aimlessly and see small, shiny relics of saints’ bodies lying still in the middle side chapel and in the crypt downstairs. They were brought to the Ursuline Church around the mid-18th century, in the Baroque era. The small bone-bodies dressed in delicate adornments – like cobwebs sprinkled with dew – seem to lie sleeping, right beside the main street bustling with life.

I continue my shopping trip and find a notice board beside a chocolate shop. It lists the names of recently deceased persons with their photos and years of birth and death. Reading the lists from top to bottom, I develop a personal relationship with the dead, although they are total strangers to me. This is the same feeling I experience towards the adorned saints’ bodies in the Ursuline Church and towards the Infanta Margarita in her portrait.

My own biographical history and the history interpreted by me influence my artistic output by taking the form of a question about existence, life and death.

Polarity in Objects and in Identity 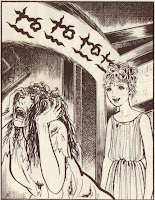 
In the Japanese horror tradition (in movies, manga, novels and paintings of ghosts since the Edo period*3 (from 1603 to 1868)), long black hair is a symbol. This long black hair inspires fear and uneasiness if the context is a creepy one, although long hair is also considered a symbol of female beauty.

A cardinal point of my art and something that I am always looking for in my work is the inherent polarity of objects, which may change into the opposite due to contrary expressions and interpretations (like the juxtaposition of beauty and fear in connection with long hair), as well as the identity of objects that render opposites indistinguishable due to common, shared qualities (such as the beauty in ugliness I found in the horror manga).

I am intrigued by the music video and live performance of Lady Gaga’s “Paparazzi”*4 because opposites – love and hate, life and death, justice and violence, trust and betrayal, sanctity and baseness, beauty and ugliness – co-exist side by side within one mise-en-scène. The spectator is disturbed by these extremes, yet the dynamics of their co-existence are at the same time overwhelming. 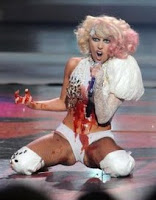 Bones and organs, gemstones and plants are materials frequently used in my current work. Bones, flesh and blood are the origin of life; when they issue forth from the body, they change into signs of hideous death. But drops of blood and broken shards of bone may also look like glittering rubies or silky-smooth pearls. Exposed nerves and flesh may resemble vigorous, lovely stalks and flowers.

Heartbeat of Death
Death and life are the themes of my artistic work. Although they are diametrically opposed, they are actually adjoining. Although they are far removed from each other, they yet come very close. From the moment of our birth, we move inexorably towards death, day after day. After life, death comes for each and every one of us without exception.

In my mind, the original significance of relics is that the remains (death) are still imbued with energy (life), like the eternal heartbeats of death. Like a dead body dressed in gleaming stones, I am looking for the dynamics of my artistic work, where beauty and ugliness, life and death co-exist in contradiction.